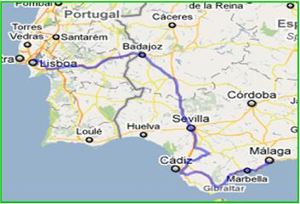 In September, Martin, our Chairman, Carl our Veterinary Trustee and I visited Spain. This was a visit that we had wanted to do for some time but it took a while to plan as we hoped we could visit several refuges and had to make sure we could fit in with everyone plus we would need to travel some distance to achieve this, as you can see from the map above.

We flew from London Heathrow to Lisbon and then travelled by road to Badajoz on the Spanish/Portuguese border. A few miles more and we arrived in Almendralejo to a wonderful welcome from Mada, her husband Rafa and their family.

Regular readers of our newsletter will know that Mada runs RECAL and we have worked with her for some years now, taking the galgos she is able to rescue. Mada and Rafa visited us earlier this year to discuss various projects and their hopes/plans for RECAL in the future. It was therefore good that we were able to visit the shelter ourselves to see the work that has been carried out and discuss future projects and possible ways we can help. 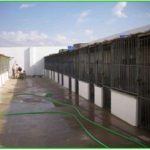 The old kennel block at RECAL

The kennels are really equipped for approx. 80 dogs but when we visited there were over 100– all shapes and sizes, some lovely dogs and sadly many who have been there for some time.The shelter is owned by the local government and Mada has a good relationship with them. They have recently funded some new kennels and with their help, and donations from others, part of the shelter has been converted to a small clinic where Mada and her vet, Juan, can castrate male dogs on site. They also have some quarantine kennels now, linked to the clinic, where dogs recovering from operations or undergoing treatment can have some time alone to recover. 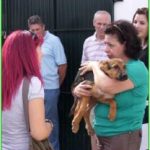 We are the only group taking the galgos from RECAL. They do receive some help from a group in Germany who take a few dogs each year – mixed breeds. The large dogs are not easy to rehome, people take them on as cuddly, fluffy puppies but they grow, and grow and then are abandoned. The smaller dogs are easier to rehome and when we visited the shelter we were able to see one lucky dog go home with a new owner (photo right) – if only this could be repeated several times daily. 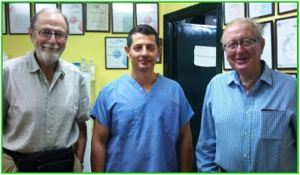 We were able to visit RECAL’s vet, Juan. He showed us around his clinic and explained the testing he carries out for the Mediterranean diseases. He stressed the need to regularly treat the dogs against fleas, ticks and worms. With so many dogs together this can be a big job but very necessary to keep this under control. Juan has performed several operations on the galgos arriving at RECAL with broken bones – he showed us x-rays taken when the dogs arrived and later after surgery and we, especially Carl, were very impressed with his work.The galgos will soon be arriving at the shelter as the hunting season will be starting. One project that Mada is working on is to replace the roof on the “old” kennel block to give more protection to the dogs in the winter and also to make the kennels more secure, especially for the galgos as sadly RECAL, like other shelters in Spain, have suffered break-ins. We hope we will be able to help with this project.

Mada has also been busy distributing copies of our Educational booklet around Extremadura. Copies of the booklet have also been distributed in summer camps and language schools in Miajadas, Caceres and Badajoz. Initial response has been very favourable and we have high hopes for this vital project.

We are also grateful to Mariangeles, Chairman of the Federacion de Protectoras de Animales de Extremadura, for her support for this project. We were fortunate to meet her when we visited Chiripaina. 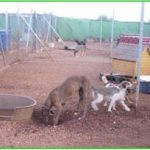 Our next visit was to Asociacion Protectora de Animales – Chiripaina, about an hour’s drive from RECAL. This shelter is run by Fatima. She, like Mada, receives many dogs, all breeds. The shelter has kennels and some paddocks for the dogs to be exercised. The dogs looked well and happy and one galgo amused us as she was busy digging a hole and didn’t want to share it so, if other dogs came along, she would lie down in it. Fatima knows that she will soon be receiving many galgos. We have offered help in the future. 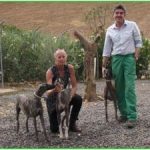 Saskia, Juan and some galgos

There were over 100 dogs, again all breeds, all looking happy and well. The shelter has a number of kennel blocks with attached runs and during the day the kennel doors are open (different kennels each day) and the dogs can run around the outer paddock. The galgos have started to come in, one large galgo followed Martin around, he was a very friendly dog but had some awful scars from his hunting days.We stayed the night in Almendralejo and set off early the next morning for the San Anton, Villamartin shelter. We were very lucky that Mada’s cousin – Aitor, was able to drive us around Spain as the refuges are well into the countryside and not easy to find. Saskia, who runs the shelter, came to the town to meet us and we followed her to the refuge.  As we approached the gates the dogs could see us and started to bark their welcome. Juan Bernal, the vet for the shelter, was also there to meet us. 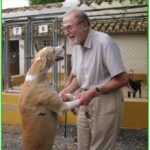 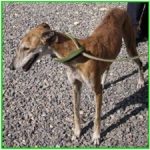 Saskia explained that she receives some help from the local government but the shelter relies very much on donations.   She showed us the medicine cupboard and the

storage area where the many coats and blankets donated by our supporters are stored ready for the coming  winter when it can be very cold.Whilst we were at the shelter a galga was brought in (photo on left) – she was very friendly, a bit thin, but came into the shelter with no problems.

We stayed overnight in Villamartin and then set off early the next morning for Chiclana to visit Refugio Kimba. The galgos we have taken from San Anton have been homed in Belgium and we hope to help again once the new galgos arrive. Saskia does find some homes for dogs from the shelter in Germany, Holland and Switzerland, and Tom – shown in the photo on the right is one lucky dog who will be leaving for a home in Switzerland soon. 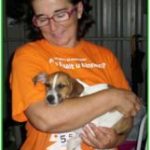 We entered the refuge and were given some jackets, shirts to wear – we were not sure why but all was revealed when the kennel doors were opened and many dogs came running to say hello!  I don’t think any of us had seen so many dogs in one place, again all breeds and so excited to see everyone and gets lots of fuss – at one point I was pinned to a kennel wall with so many dogs wanting to be stroked—I didn’t have enough hands! They soon calmed down and we then had a tour of the refuge, which also has cats.Concha, who runs the refuge, and Julio came to meet us in Chiclana and took us to the refuge.  We stopped by the gates and Julio ran up the road – we then realised that a small dog had been left outside the gate, the man leaving her had got away.   She was checked over and washed and appeared well, if not a little bewildered about what was going on. She has been named “Carolina” in my honour. 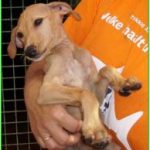 As with the other refuges many dogs have been there for some time – they are happy and well and receive lots of fuss and attention but if only they could be rehomed.We met the galgos that we are helping and they will be travelling to Belgium before the end of the year.

Refugio Kimba has suffered break-ins and they want to build a secure area for the galgos – we discussed this project with Concha and Julio and hope that we can help with this. We have been able to fund the veterinary care for the galgos we can take from them but whilst they recover from their sterilisation operations they need to be safe and in a secure area.

We saw our first galgo puppy – found wandering outside the refuge – he was very friendly, about 8 weeks old – I kept saying that I thought he would fit in my bag to come home! We have sent Refugio Kimba many coats and blankets and we were shown the store where they are kept ready for the winter. 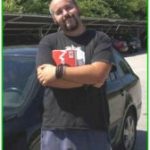 Aitor, Mada’s cousin, who drove us around Spain

Our next stop was Malaga airport, we said goodbye and thanks to Aitor and had plenty of time to reflect on our trip, due to our flight being delayed.  We had travelled many miles since arriving in Lisbon but we all felt the visit had been very worthwhile. Visiting the refuges, and all are different, we were able to see what people like Mada, Fatima, Saskia and Concha have to deal with on a daily basis. They care for so many dogs with little funding and rely very much on donations, mostly from abroad. They are very appreciative of the help and support GIN gives them and we could not do this without the help you, our supporters, give to us. Thank you from all of us.