The real problem in Spain

The real galgo problem in Spain as described by those working tirelessly to help.

From Mo Swatek Garcia Santos, PRO-GALGO, Barcelona
…the cruel hangings of the of hounds is again given so much publicity (this year have been found less than 10 cases!) but nobody speaks about the horrible way the poor sight hounds live… The poor Spanish sight hounds are born to suffer all their lives as they live in the worst conditions any of us can imagine. Barely receiving any food, and if so, they only are fed with stale bread and water because the hunters believe that a hungry hound hunts better. The dogs have to live in dirty holes in the ground, in windowless stables or cellars, in complete darkness, sometimes for days unattended and without a chance to move. Many of the dogs are chained to a tree and left there until the hunter remembers them and often they are dead when he comes back again.

The gypsies are also responsible for their way of keeping galgos and many shelters accuse them of having broken into their premises and having stolen galgos to use them as sparring partners for dogfights. And on top of it, in nearly every forest in the hunting areas you find abandoned and injured galgos wandering around. More than 60% of the galgos found have wounds from bullets or broken legs etc and of course looking like a walking skeleton … Many of them die a senseless death run over by a car. We calculate that less than 2,500 hounds will be saved this year and this is probably not even 10% of the galgo population in Spain!

The Spanish government is very much implicated in the mistreating of animals as they maintain the perreras (killing stations or so called city dog pounds) where the abandoned dogs are “stored” until their destruction… If an injured galgo is found, the animal will not receive any treatment, no vet attends them and nothing is done to save them from suffering because the people at the perreras do not believe that this dog has a chance to be adopted. It can easily happen that a galgo with an open fracture of the femur is for 2 weeks unattended and suffers the most terrible pain.

If we could force the government to apply the new law for protection of animals also to the hunting dogs and if the SEPRONA (Spanish Environmental Police) would check on the hunters and reduce the maximum of dogs per Galguero to 5 or less, many of those guys would stop keeping galgos as it would be far too expensive for them to build kennels accordingly to the standards….

From Nuria Blanco, Amigos de los Galgos, Madrid
The Azuqueca story is what we had talk about when we first got in contact some days ago… Eva had saw the next batch and told me about the wounded female, so when I first spoke to Maria I told her this and she promised me that she shall take her immediately. But afterwards, I spoke to the man there and told me she was very bad. So probably they put her to death…What I can tell you is that there are worst places of perreras than this one. The dogs at first sight did not seem bad though you can imagine the sad situation and the depression you can feel. Our active rescue group in Madrid, has saved recently ( some stolen at great risk ) galgos from the hands and terrible treatment of gypsies and scrap dealers. This is worst somehow than this perrera…

The situation is catastrophic : At this time of the year there are a lot of perreras around Castilla La Mancha filled up with poor creatures abandoned pitiless by their unscrupulous owners after having been used and abused. There are a lot of galgos strayed in the outskirts of villages and cities and some times in neighbourhood of roads or motorways. There is a point : They are abandoned younger and younger .

From Mati Cubillo, AMNISTIA ANIMAL, Madrid
As you know the hunting season has ended and now galgos are rejected everywhere. At the moment we have various galgos from Estremeras in a boarding kennels waiting to be helped by Galgos sin Fronteras. In the dog pound of Azuqueca there was a bitch with her neck open and I went there immediately but the vet had already put her to sleep but there I could see thirteen more galgos waiting to be put to sleep next Wednesday. We have no refuge and we cannot spend more money on a boarding kennel and we are trying to find another place to put them but it is very difficult and the problem is that since I have seen these poor animals there, I can’t get them out of my mind. I ask please to tell me if you can help these animals, I know you already have many on your hands and I don’t want to harass you but I want to know that I have done all I possibly could to save them…

From Cristina Garcia Moreno of Galgos Sin Fronteras, Madrid
…In the capital of Madrid 1,000 galgos live in the most horrible conditions…In the back of vans with crusts of bread as their only food and in the heat of the summer they asphyxiate and in the winter they die of cold…We denounce the perpetrators but the community of Madrid exerts no control over them. They keep these galgos in dark wet caves or warehouses full of rats.. where they are born and live badly and then die… Health control is nonexistent. It would be so easy to oblige these places to close and not exceed the five dogs which is the law above which certain standards should be complied with but the politicians have no desire to implement the law over these infected places where each year more galgos are born and live in such miserable conditions. The hunters throw them in wells, hang them or abandon them to avoid having to spare them food until the next hunting season begins.. Many get run over, and the killing stations are full of galgos. Their only hope is for the European groups to take them far away from this country but of course they can only take a small number of the thousands who suffer miserably in this country of ours…

From Ana Fernandez, Southern Spain,
This is a desperate call….our streets are full of greyhounds….Very thin… lonely….confused.. left aside because greyhounds here are not considered companion dogs, just hunting dogs. Please help us. 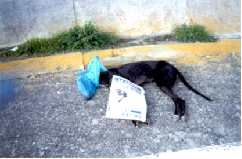 This poor galga was found in the road by Cristina as she drove towards Avila. The poor bitch had been cruelly suffocated by a plastic bag tied over her head.

From The ARK-Spring 2003– Journal of the Catholic Study Circle for Animal Welfare, reviews a book

Eternal Treblinka; our treatment of animals and the Holocaust, by Charles Patterson NY Lantern books ISBN 1930051999.

‘This is a profoundly harrowing but important book. The claim it makes… is that the attitude which people adopted towards animals, to distance themselves from them as they learnt to exploit them, paved the way for the worst excesses of human brutality towards other people. …that the exploitation and slaughter of animals was and is the model and impetus for human oppression and violence.-..the slaughterhouse providing the blue-print for the mass extermination of people…Power and vulnerability are the threads running through the book ….Patterson hopes his book helps our society recognise, acknowledge and take responsibility for the horrific treatment of animals and helps curb our arrogant attitude towards the earth’