The Life of a Galgo in Spain by Ana Fernandez 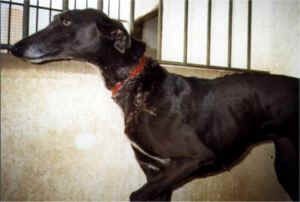 Celeste, a female galgo was found hanged but still alive and was rescued, rehabilitated and eventually homed. The photograph comes from RECAL Association in Almendralejo, Badajoz in Extremadura, September 2003.

We may have to go back 40 or 50 years in order to understand what is happening to galgos in rural Spain. At that time, the galgo accompanied the peasant farmer into the fields and, while the farmer looked after his crops, his dog brought home a rabbit or a hare for his evening meal. Dogs in general and galgos in particular lived indoors with the family and were fed on scraps. The word “pet” didn’t exist. Each dog had to work to “earn his keep”, hunting for his master, looking after the farm animals, etc. Families were usually large and incomes were small so dogs were considered to be mere “tools”.

A farmer might be proud of the fact that his galgo was a good hunter and give it fresh water when he got home and the leftovers from the family’s supper; but that was as far as the relationship ever went between dog and master. If the dog became ill, most families could not afford to take it to the vet, which was almost a luxury. In any case, it was easy to get another dog through family or neighbours: nearly everybody bred dogs. Even today, many things have not changed. We surf the Internet, watch cable TV and DVD, but we still think in the same way as our forefathers – at least, as far as galgos are concerned.

I live in a village in the heart of ‘La Mancha’, a region populated with vineyards where hunting is still a popular ‘pastime’. Hunters still breed galgos indiscriminately at home without any sort of control. There is a law protecting domestic animals, but it is hardly ever enforced and not at all in the case of galgos, who have never been regarded as pets. As far as farmers are concerned, galgos are simply ‘hunting dogs’.

All my life I have witnessed and heard about terrifying cases of cruelty, and these are precisely the ones that attract public attention because they are so dramatic. Of course, there are cruel people in Spain, like everywhere else in the world, but it would be too simple to explain a problem of this size just by saying “the Spanish are cruel”.

Cruelty, neglect and a total disregard for the rights of galgos are, in this case, a direct result of years and years of ignorance about these beautiful animals, and it is precisely this ignorance that we have to tackle once and for all.

Until 10 or 15 years ago, nobody in this part of Spain would have dreamt of buying “special food” for his dog or of taking it to the vet (the vet’s main function was to look after cows, sheep and other animals regarded as “useful”). 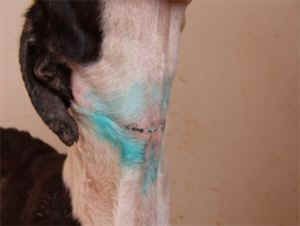 Lolo was found in September 2003 with this wound and in a starved state in Arjona in Andalucia and was taken into care by Laura Plaza.

But today these things are becoming more and more the norm. So, when are attitudes towards galgos going to change? There are many people in Spain today fighting to improve the lives of these animals, often with invaluable support from organizations outside Spain. There are many – but there are by no means enough! Every year, at the end of the hunting season, our streets are filled with galgos – the ones that “have no further use” for hunting.

Galgos are regularly crossbred with those of friends and acquaintances and, when a litter is born, the breeders take their pick: “There are seven, but I only want two…” The rest of the puppies are eliminated. Any method will do: some breeders put the dogs in plastic bags and then suffocate them with the exhaust fumes from their cars (“they don’t feel a thing”, the breeders claim); other put them in a cardboard box and leave them by the roadside (“maybe someone will find them and adopt them”). Or they throw them over the wall of the local refuge or dog pound (“this lot will take care of them”).

Usually, the fate in store for the “chosen few” is even worse. They are brought up on stale bread and water (which often leads to malformations of the bones making it impossible for the dogs to run) and are often deprived of the warmth of their mothers and any hint of human affection. 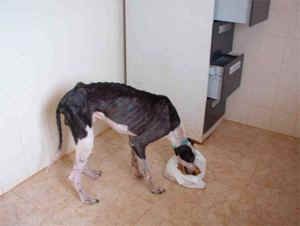 Gradually, they will start to go out with their “master” for a day’s hunting … but they will not be able to enjoy the sunlight or the fresh air that they miss when they are locked up at home. On the contrary, they will have to imitate the other dogs by searching, running incessantly, catching their quarry, and handing it over obediently to their master. If they do their job well, they will return home exhausted at the end of the day and have their reward; water, stale bread, and the right to liven a little longer. But if they hesitate when pursuing the hare, if they cannot catch it or are not obedient at all times, their master will lose his temper and maybe he will beat them “to teach them a lesson”.

Then he will load them mercilessly into the car, thinking: “Tomorrow I’ll give them another try, and if that doesn’t work…..”

The unspoken half of the sentence is the worst thing that can happen to a galgo.

The next day, the scene is reenacted: the galgo does not do what is expected of him (“Stupid animal. Is that what I’ve been feeding him for?”) and his master decides that there will be no return trip for this dog. He takes aim and, without a second thought … A shot rings out, dry and muffled … The galgo’s eyes glaze over and now there is no more sun, nor air, nor smell of earth; but the kicks, the dry bread and the darkened room are also at an end.

But the master does not always pull the trigger. Sometimes, he lacks the “guts”, as his fellow hunters would say, and while the galgo runs around heedlessly, he packs the rest of the animals into the car and simply drives away. When the galgo realizes what has happened, it starts to run desperately after the car until, panting and bewildered, it is forced to give up. It starts to wander at random. At first, it is so wonderful to be free… but there is no water on our great plains and the animal is too tired to hunt.

Many dogs, frightened of people, lose their way in the fields and finally lie down to die of hunger and thirst in the merciless sun. Others, sick and terrified, manage to reach a village. Nobody seems to notice them. We are so used to seeing them die in front of our very eyes that we no longer even stop to look. And they, noble and fearful, quicken their step and vanish.

They hide by day and roam the streets by night. Many of them die right there in the middle of the road. Others, if they are spotted in open country during the day, will be shot by hunters (the hunters say that abandoned galgos that survive in the countryside “spoil the hunt”). Yet others will be run over and left lying by the side of the road; no-one will even bother to remove their corpses. A few will arrive, half-dead, at an animal refuge.

Like many other people, I have seen these survivors. My heart bled to see their sad faces and stroke their wasted bodies exhausted after such a long journey…delicate, sweet and full of tenderness in spite of their never-ending suffering. They arrived at the refuge half-dead, almost hopeless, with multiple fractures, severe leishmaniasis, malnutrition, open wounds and parasites of every description. The pregnant females could hardly walk – they were little more than skin and bone.

Nearly always, a volunteer feels overwhelmed. There is no money for veterinary care, or medicines and barely enough for food… just a living creature looking at us and timidly asking to be stroked in spite of all that it has suffered.

Sometimes I have received photos of these dogs leading a new life thousands of miles from here. I can see them, still amazed at their good fortune, walking happily along a beach or being patted and kissed. 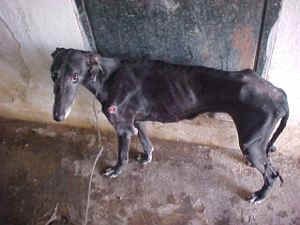 A female galga found starved and wounded in Cadiz in September 2003 and rescued by Juan Jesus.

I think I am a realistic person and I know that we are never going to change the attitudes of our parents and grandparents … but we can try to break the vicious circle of pain and death and make this a better world for our children by teaching them, educating them and so eradicating the ignorance that surrounds our magnificent companions, the galgos.

Sometimes I have thought of adopting one of the many galgos that are sent abroad, but there is a problem: my galgo would never be safe if we went out for a walk in the countryside as I do with my other dogs. Someone could steal him at any moment if he strayed too far from my side … and I could not bear, while he was running happily in the open fields, to hear one of those shots that terrify me so much and that I can hear even now from my house as I write these lines.

At present, no galgo is safe from ignorance. We can save hundreds, even thousands … but, if we do not fight the battle once and for all on the education front, we will simply be applying Band-Aids to open wounds.