On the 5 December 2014 GIN put on its largest and perhaps its most important event to date.

Earlier in the Year we had been granted a licence to stage the UK premiere of a remarkable and moving documentary film entitled “February” which depicts the dreadful working lives of the hunting and coursing galgos of Spain. This brilliant film was made by a young Spanish film maker Irene Blanquez.

Having seen this film we determined that it gave us a fantastic opportunity to spread the word about what is still a largely unknown welfare problem and, at the same time, to raise awareness of the work done by GIN as the leading UK charity devoted to the rescue and rehoming of the much abused galgos of Spain.

The event was held at the stunning venue afforded by The Royal Society of Medicine in Wimpole Street in the West End of London.

Almost 150 guests attended, including our own people and a host of leading figures in the animal welfare world including our founder Anne Finch.

The evening was hosted by our wonderful Patron Peter Egan accompanied by actress Jennie Seagrove, both of whom gave moving readings of poems relating to the wonder of dogs.

Following the showing of the film, Irene Blanquez joined Peter Egan and Martin in replying to a Question and Answer session which brought out how moved and interested our audience had been.

The event closed by a further opportunity for our guests to get together over a drink to discuss what we had seen, to ask many questions of our staff and volunteers and to “network”. We were joined by Andrew Rosendill MP the Chair of the Parliamentary Cross-Party Group on Greyhounds, who was most supportive of our work and promised his cooperation for the future, suggesting that he might host an event for GIN at the House of Commons.

I must emphasise that this ambitious event was only made possible by a huge effort on the part of our hard-pressed headquarters staff, to whom our gratitude must go.

We have had a large amount of very favourable feedback from those present and we all consider that the expense and effort expended was very much worthwhile in achieving the objective of projecting onto a higher level an awareness of the plight of the galgos and of the part played by GIN.

For my part, I see this as the start of an ongoing effort to boost GIN’s standing in the animal welfare world and of spreading awareness of the terrible problems we face. 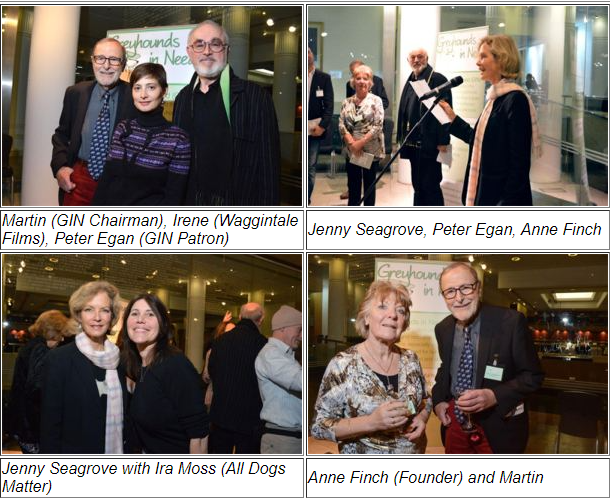