Plight of the greyhound in Europe (2001) 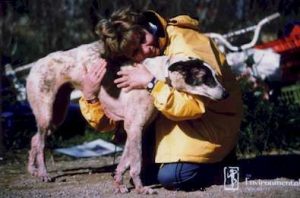 Anne with Firoy in Mallorca, the day of her rescue. All four of her legs show untreated fractures. She went to Switzerland, was much cherished and cared for in her few surviving days.

We have become more aware of the plight of greyhounds in Europe and elsewhere over the last 10 years, though their suffering has gone on for decades. Their qualities as swift hunters have been a thorn in the side of these hapless creatures, as their ability to chase and hunt for food converts them into becoming a tool for sport, susceptible to man’s need for prestige, machismo, greed and the addiction to gambling.

There are, alas, no limits to the amount of abuse and degradation that these gentle, submissive, sensitive creatures suffer – from forced over-breeding, to being chained, neglected and exposed to extremes of climate, to drug abuse, to revengeful scorn and torture by soured gamblers, to disease, and finally to early, violent death by hanging, beating or burning.

Bouncer from Medina del Campo, in UK, after his 6 months’ in quarantine.
Did I hear someone say that greyhounds can’t live with cats?

I first became aware of the situation of greyhounds, hitherto largely hidden, when, after adopting and becoming besotted by my labrador, a retired guide dog in 1983, I spent time at a number of dog refuges in the south of England, helping them with supplies and walking their homeless dogs.

One third of the inmates of those rescue kennels with a non-destruction policy, were unwanted greyhounds, found abandoned in the UK on motorways, fields, and in towns and cities, the debris of a hundred greyhound racing tracks, which started their lives in this country in the 1920’s. The sadness and vulnerability of these dogs concerned me deeply, as, in those days, few potential pet owners visiting the refuges would ever choose a greyhound as a pet. They suffered from many myths which did them no favours, like “they eat too much”, “they couldn’t live inside in a house with the family”, “they would be dangerous with children”, “they need huge amounts of exercise”, “they are vicious and bite because they wear muzzles”, “they belong only to the race track and to gypsy camps”, “they are not loveable and cuddly”, “they could not be toilet trained”, “ they cannot live with small animals”– it goes on and on – I’ve heard it all!

The truth is that this very ancient, noble, faultlessly bred breed of dog craves love and affection and desperately wants to please; longs to belong, for once in its life, to a family with women, children and a home; needs little but gentle exercise on the lead, followed by a long, long sleep on a sofa; eats only what it needs to maintain its weight and no more; moves slowly and gracefully adorning your furnishings with it’s silky coat without smell and without moulting; and as for aggression? – how significant that out of 50 breeds studied for their aggressive tendencies by Southampton University in 1994, the greyhound was rated almost the lowest at no. 49! In fact, on the contrary, this dog’s submissiveness is more of a problem than its dominance, needing much encouragement and confidence–boosting, often throughout its life, due to its long history of treachery and abuse.

In the 1980’s I adopted a greyhound bitch, Emma, who heralded the beginning of my devotion and dedication to the cause of this breed of dog. I started first by helping Ann Shannon, possibly the world’s earliest and indeed most modest champion for greyhounds, and together we homed hundreds of unwanted dogs, she, co-ordinating the rescues by telephone from the Isle of Man, and I, meeting and checking the adoptive owners and collecting and transporting the dogs all over England. Our joint concern grew as we fought the racing authorities with barrages of letters defending the rights of the greyhound and pricking the consciences of the Racing Club and politicians with the reality of this desperate situation.

Soon we began to hear of the dreadful conditions of the Irish greyhounds imported into Spain for racing. At that time, in 1990, there were only 4 race tracks left in Spain, there having been 16 tracks in Franco’s day.

I could bear to hear no longer the rumours regarding their suffering there, and went to Palma track, Mallorca, in 1991 to investigate the conditions there myself. My worst fears were confirmed, watching lame dogs limping to the starting boxes, with crooked legs and feet, eyes red and inflamed with the scarring of so much sand in them, and coats of no colour except of pink skin, stained with urine and filth. By trickery, I obtained four dogs from them and flew back to England with them, heralding their arrival with much publicity in the national, and Irish press and in the sporting newspapers.

The world started to stir, and this work for the defence of the greyhounds of Spain began, and my life changed from that moment.

What followed were numerous further investigative visits on my part to the tracks, combining physical work in the kennels themselves with large donations of medical and other supplies and with many attempts at co-operating with the management, trainers and vets in Spain in order to try to change attitudes and to educate the handlers in better veterinary care and correct protocol. I produced veterinary information in Spanish, and in 1995, created a 2 hour long video on the Care of the Racing Greyhound, of which 1000 copies were distributed in Spain and which still is in demand.

Several hundred retired and unwanted dogs were transported from Spain to northern Europe, as helpers and sympathisers emerged firstly from Switzerland and from American Forces and later, nationals, in Germany. In 1999, on the closure of Mallorca track by the police after much publicity work and many, many letters, we transported 300 dogs from the island to several different countries.

The word continued to spread throughout Europe. Our newsletters since 1997, were translated into German and French and later into Flemish/Dutch, Spanish and Norwegian/Swedish. Sighthound enthusiasts contacted me from several different countries, in the first place, offering a home for one of our rescued dogs. From these supporters, over these 10 years, 30 or so adoption groups and individuals have sprung up in as many as 10 different countries, dedicated solely or in part to the greyhounds of Spain.

Rumours of the hangings and violence in rural areas, of Spain’s own bred greyhounds, the galgos, haunted me, but the evidence was hard to find, until in 1995, I was shown a video by an animal welfare group working in Madrid, of hangings of galgos in southern Spain near Granada. I went there immediately to meet the people and the journalist concerned and copied the video for our associates in the USA who took it to the Spanish Embassy in Washington. From Granada, next began a trail of rescued galgos first to Switzerland and then to Germany and the UK

Three years later, I made contact with Fermin Perez of Scooby Association in the north of Spain after seeing a news item on Spanish TV, from Medina del Campo. Our Association was glad to be able to assist and work alongside a Spanish association, and over a period of 2 years we lavished all the support we could humanly give, in the way of manpower, kennelling materials, surgical and medical supplies, a full operating theatre, financial help for food etc including a row of galvanised steel kennels for 200 dogs and effecting the adoption of 1000 of their rescued galgos and sharing with them the benefit and responses of our publicity work from all our 4000 supporters in Europe and USA. Now they work independently while we turn our attention to rescuing galgos from 20 or so other refuges and dog pounds round Spain who have nothing and no-one to help them, while still accepting 200 or so per year of the retired Irish greyhounds from the one remaining dog track in Barcelona.

In the last 12 months, 650 greyhounds from Spain, Italy (Rome’s dog track) and Ireland have come into our care, and found their way to homes helped by sympathetic individuals and adoption groups who come across our publicity material and establish themselves in as far away countries as Finland, Sweden and Norway.

Sadly, it is a bottomless well. We strive also to touch the root of the problem by organising letters to politicians and strengthening the voices of welfare workers within Spain itself who are crying out for a national law of protection for animals, to give teeth in the first place to their efforts at defending the defenceless. Next will come the need for pressure from the Spanish themselves to insist on such a law being enforced.

Spain is a proud nation, steeped in tradition, and such changes are slow to happen, but we hope that, along with the profound changes which have taken place in Spanish society over the last 3 decades, that finally, to complete this transformation, Spain will recognise the necessity for a charitable attitude and respect towards its animals and their right to live without pain and unnecessary suffering. 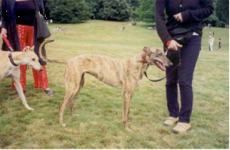 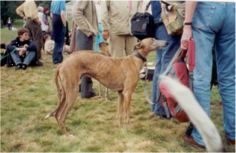 A Greyhound, a Galgo – What’s the difference?
Two dogs at a GIN event on Hampstead Heath, London