Paralysis of the Larynx 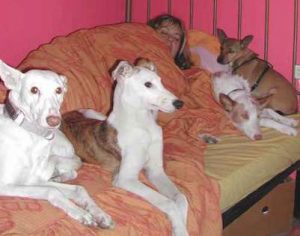 Paralysis of the larynx is a relatively common condition of elderly dogs which might be confused with heart or lung failure. The diagnosis of laryngeal paralysis should be considered whenever a dog shows signs of abnormally noisy breathing, fatigue at exercise, a retching cough and muting of the bark. The results of surgery to relieve the disease are excellent, in spite of the advanced age of many of the patients involved.

The Disease consists of a degeneration of the nerves which motivate the muscles of the voice box. It is quite common in elderly dogs, especially males. Although the Labrador, Irish Setter and Afghan Hound are particularly susceptible, practically any breed in the middle weight range could be involved.

Symptoms may be insidious in onset and go unnoticed because owners expect elderly dogs to slow up and huff and puff a bit at exercise. One or more of the following are the frequent signs of laryngeal paralysis–noisy, laboured breathing; a moist retching cough; changed bark; reduced exercise ability; episodes of extreme respiratory difficulty, especially when excited or in hot weather.

Diagnosis is often confused with other serious respiratory or cardiac disorders. Confirmation depends upon an assessment of voice-box function under a light general anaesthetic. If the diagnosis proves to be correct, surgery is best performed under the same anaesthetic.

Treatment is by an operation to fix the voice-box in a safe unobstructed position. Although both sides of the larynx will be affected, a one-sided operation is effective. In spite of the age of many of the dogs subjected to this surgery, the results are generally excellent.

Extract from a text by.

Further note from Anne re Laryngeal Stridor (from newsletter Autumn 2001)
This is due to paralysis of the vocal cords which can obstruct the trachea and prevent effective panting, heat loss and air entry and is not uncommon in long necked animals like the horse and greyhound. The tongue may go black due to lack of oxygen and the dog may suffer hyperthermia. It is due to degeneration of the nerve to the cords. Rapid cooling of the dog with cold water is essential and immediate transport to a vet, for opening of the airway, is urgent. Any warning signs of noisy breathing from your greyhound on exercise, panting or excitement, should be investigated immediately before such a terrible death can occur. Surgery is necessary to pull and tie aside one of the cords. It is delicate surgery and usually done by a specialist, but it is not very invasive.