Last year when we visited the RECAL shelter in Almendralejo, run by Mada, we were able to see for ourselves how hard Mada and her few helpers have to work looking after so many dogs. Already this year we have taken many galgos from her. Some of these galgos have been handed into the shelter by local galgueros and others have been found roaming in the neighbourhood. 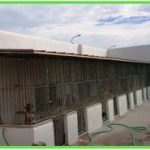 When we visited RECAL, the local government had recently funded the building of some new kennels, and Mada wanted to replace the roof on the old kennel block to provide the dogs kept there with more protection against the weather. We have been able to fund this project which was completed before the winter.

Another project we are providing funding for, along with a group in Germany, is an exercise paddock for RECAL. Mada is in the process of signing an agreement with the local government which will allow her to use the land and kennels for many years to help local animals. An exercise paddock will certainly improve the conditions for the dogs as space in the current kennels and runs is very limited.

When we visited Refugio Kimba in Chiclana, Concha, who runs the refuge, told us that they wanted to build a secure area / kennel for the galgos. They had suffered break ins and had galgos stolen. We could see for ourselves the need for this and at the end of last year we were able to provide the funding for this project. Concha says the galgos enjoy their new kennel ….and the treats that were sent with the last box of coats. The kennels will be painted once the weather improves but at the moment the galgos have settled in well. Some rescued from the Jerez pound in Cadiz, will be travelling to Belgium soon to be homed by Josephine and GRB. 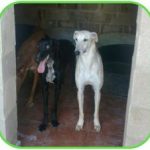 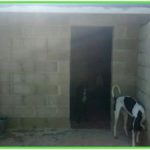 We have also been able to help Saskia at the Villamartin refuge in Cadiz by funding the veterinary treatment of 30 galgos who were then able to be homed in Austria, France, Germany and Switzerland.

Fatima who runs Asociacion Protectora de Animales Chiripaina was a new contact we made last year, we were able to send her a supply of coats and dog treats last winter. 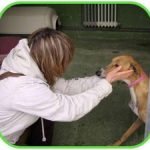 Lily with one of the nervous galgos at Arca de Noe

In March this year Martin, Carl, Christine (who runs the GIN shop in Brighton) and I visited Spain. We flew to Alicante and were met by Lily the President of the Arca de Noe refuge in Albacete. She and Mar, a volunteer at the refuge, kindly offered to be “our drivers” for this trip, which was much appreciated.

Our first visit was to the Arca de Noe refuge, which is in the Albacete countryside – about a twenty-minute drive from the town. The refuge is one of the largest in Spain and much work has been done there over the last couple of years to improve conditions. 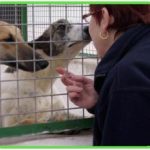 Christine getting to know the galgos at Albacete

Arca de Noe, like most refuges in Spain, cares for all breeds of dogs, and some cats. We were made very welcome by all the volunteers there and were shown around the refuge, which is much bigger than I had thought. We were able to see some of the galgos whose veterinary care we are funding and who will be transported soon to homes in Italy and Slovenia, thanks to GACI and SASIN.

Martin with one of the pups

There were about 300 dogs at the shelter – more than it is really able to cope with – but all the dogs looked well and happy and in each pen there was a sleeping area and a good size area for running around.

The new clinic, which has been added recently, has made it possible for much of the routine veterinary work to be carried out on site. They have a quarantine area where new arrivals are placed and whilst we were there two puppies were brought in, found under a bridge near the motorway – they were very friendly and fortunately looked in good condition. No sooner had they been booked in when a galga arrived, a lovely looking dog, black, long haired female, quite thin but very friendly.

We were all very impressed with the great work of the Arca de Noe team and for me, it was nice to meet the people who I have got to know over the years through the emails when we have been making arrangements for the galgos. 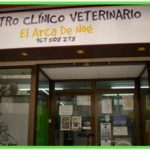 Our next stop was to the Arca de Noe veterinary clinic in Albacete. This was a small clinic but very well equipped and profits made here go towards the huge costs involved in running the refuge.

In the evening we were able to have a meeting with the Arca de Noe committee and discussed possible ways we could further help their work as well as preparing the timetable for introducing the Educational Booklet into local schools. This project is something that all at Arca de Noe are very keen to get going and are grateful to GIN for starting this initiative. More copies will now be printed by us and we are also going to look at the possibility of getting some material onto DVD as nowadays so much work in schools is computer based.

Following our meeting we met up with Sigur, Vice-President of www.tierheim-tierhilfe.de in Kleve who had travelled to collect 57 dogs (mixed breeds) to be homed in Germany. Sigur has been working to help the dogs in Spain for many years now and told us that he usually moves just over 1,000 dogs each year which is amazing. This help is vital to the refuge as the opportunities for rehoming dogs in Spain are very limited. He told us that people ask for Albacete dogs as they know they have been cared for well at Arca de Noe. 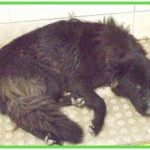 The next morning, after breakfast and a brief meeting with Balbino from the Arca de Noe shelter, we set off for Mazarron. On route Lily stopped for petrol and we all got out to stretch our legs, only to see a dog lying outside the garage looking very poorly, he wagged his tail and was very friendly but seemed unable to get up. Carl checked him over and found no broken bones, he eventually got up, he was full of ticks and very weak. The man at the garage told us he had been there for 7 years ! – we could not believe this but as there was a restaurant next to the garage he probably got scraps of food from there if he was lucky. None of us could leave him so he was bundled into the car next to the suitcases – he would be safe and cared for now. Later in the day Lily and Mar took him back to Albacete; we have called him Olympio as that was the name of the garage where we found him. 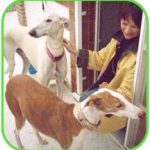 We arrived at Gail and Andy’s house in Mazarron and met their two lovely galgos – Amber and Harvey. Gail and Andy have helped rescue and care for many galgos that we have been able to fund and Josephine from Greyhounds Rescue Belgium has collected them from Alicante and rehomed them. They took us to meet John who has some land and a small shelter just outside Mazarron where he has been helping local dogs and rehoming them when possible. 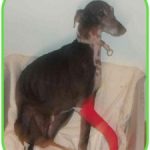 Next stop was to meet volunteers at Noah’s Arc. Paul and his team help all breeds and recently moved to a lovely place in the hills outside Mazarron where the dogs have plenty of room to run around. Unfortunately one of the galgos had nipped another one called Alfie just before we arrived so Carl had to put his vet’s hat on again and treat the wound. Alfie was so good while this was being done that he was given a treat, which he took and ate very quickly.

The majority of the galgos that Noah’s Arc rescue are rehomed in Belgium and Alfie, mentioned above, will soon be travelling with Lex, Rafa, Nieve, Valiente, Sam, Jet, Misty and Austin. We set off back on the road again this time to Murcia where we were to meet Tina and Gaynor of Galgos del Sol. They are a relatively new group but are doing great work helping galgos and podencos in the Murcia area. They have recently built some kennels and the dogs seemed very happy in these with their lovely big beds and thick duvets. 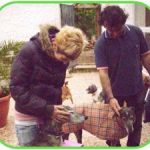 Charl and Dioni of 112Carlota Galgos

Charl and Dioni of 112Carlota Galgos in Malaga had kindly driven five hours to come and meet us which was great.

Charl works hard in the Malaga area helping the galgos and she and Tina help each other out. Sometimes Tina rescues very nervous galgos needing a lot of one–to-one care and Charl will come and collect these dogs and take them back to Malaga to spend time socialising them. We have all been in touch through the emails for a long time so again it was nice to put names to faces. We were able to have a meeting to discuss possible ways we can help their work in the future.

They are both very interested in our Educational Booklet and will help us get this into local schools in their areas. Four galgos we met were due to fly to Belgium the following day. Two dogs only had 3 legs but were coping so well. Romero who had lost part of his back leg was very nervous, whereas Jenny who had lost a front leg was quite confident. 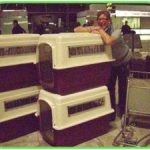 Richard, who helps Tina, drove us to Alicante airport where we met Josephine, she had arrived earlier that day. She asked if Christine and I would help at the airport the next day which meant getting up at 5am! – anyone who knows me knows that “I don’t do mornings” – but thankfully Christine was there to make sure we were all up and loading the 4 large dog crates into the back of the taxi at 6am. Josephine and her volunteers have flown many times to Spain to collect the galgos and having queued myself at booking desks and departure gates I could only imagine how hard this must be when you are on your own with 4 dogs. Now I know! 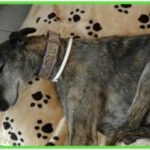 Carrying and assembling the dog crates was a long and heavy job and getting through the special luggage area at the new Alicante airport terminal took forever- thank goodness the galgos coped so well and I am pleased to say that all arrived safely in Belgium.

Christine and I waited at the airport for Carl and Martin to join us for the flight home. All agreed that this visit had been very worthwhile and we had learnt a lot. We look forward to discussing our visit with the rest of the GIN committee. We all want to continue our work which includes encouraging and assisting those wonderful people in Spain who care so much, on a daily basis, for these lovely dogs.

We could not do this work without the help and encouragement given to us by our supporters and I pass on here the thanks from the refuges we are able to help to all of you, along with my own. 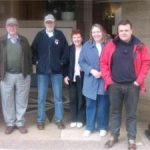 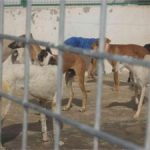 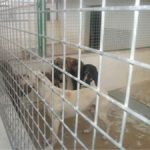 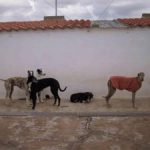 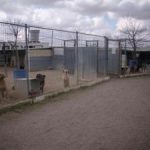 Dogs at Arca de Noe for homing in Germany 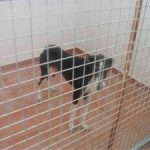 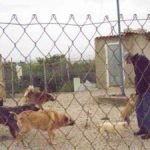 Martin with some of John’s rescues 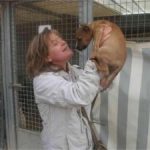 Lily, President of Arca de Noe, Albacete with one of the pups 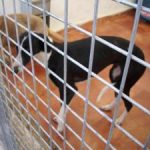 Galgos in the new kennel block at Arca de Noe 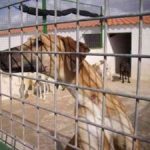 Galgos at the Arca de Noe refuge in Albacete 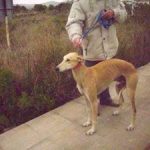 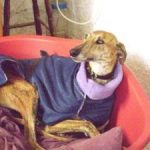 One lucky galga at Tina and Gaynor’s in Murcia