All of the galgos we rescue are tested for Mediterranean parasites and diseases: Leishmaniasis, Babesiosis, Heartworm and Ehrlichiosis. All of which are diseases that occur in Mediterranean countries but are not commonly known or endemic in the UK.

The tests we undertake are to ascertain whether an individual galgo is currently infected with this disease, but diagnosis can be challenging and latent infections can be difficult to diagnose. The aim of this report is not to make you worry about these diseases but only to make you aware of the existence of these diseases.

Please remember that the galgos have been tested for these diseases however if you travel to an endemic country or you think that your galgo has any of the clinical signs shown above take the galgo to the veterinarian as soon as possible.

Causing agent:
Leishmaniasis is caused by the protozoan parasite Leishmania infantum, which is transmitted by sand flies of the Phlebotomus species. Dogs are the major reservoir for this infection.

Transmission:
The Leishmania parasite is transmitted to the dog by the bite of the sandfly when feeding on the dogs’ blood. The most common time of the year for the sandfly to feed on the dog is from April until late September. Sandflies are weather-dependent and are more predominant near water sources like rivers. The incubation period can take from 3 months to seven years. Leishmaniasis is a zoonotic disease; this means it can be transmitted to humans by the sandfly as a vector, so the dog can act as a reservoir for the parasite. This transmission can happen in countries in Southern Europe where the sandfly is present; however the clinical signs would not be like the dog’s clinical signs.

READ MORE by clicking on the image below to open the full report on Mediterranean parasites and diseases: 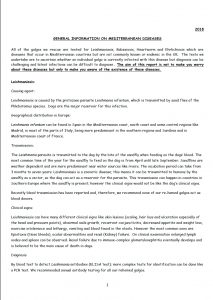 Welcome to the new GIN shop. Please note: Existing customers will need to open a new account when you make your first purchase. Overseas customers can now order products from the store.