Apologies but we do not know the author of this article. If you recognise it, could you please contact us so we can credit the article accordingly.

We got our new greyhound, Lukas, from Johanna Beumer of the RGT at Waltham Abbey. He is a 5 year old dark brown dog (if you have met him you will remember he is the one with the fluffy coat). We already have another greyhound, Lee, also 5, who came from the same place about 15 months ago and two mongrel bitches who are both 15 years old and have been with us since they were puppies. We also have 3 cats, two black cats aged 14 and a siamese aged 12, all of them are used to dogs having been around them all their lives but we still had to introduce Lukas to them, not knowing how he would react as he had never come across any cats before. This was obviously a concern to us but we were not unduly worried as we had socialised other dogs with our cats in the past including Lee who had always been fine with them. 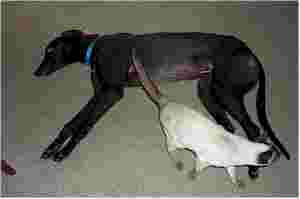 As soon as we got home with Lukas we took him into the house on his lead and walked him around the ground floor, letting him have a good sniff, it’s a good idea to know where your cats are going to be when you get the dog home, maybe waiting for the car outside and taking off at top speed up the road when they see the new dog wouldn’t be an ideal start. The first cat Lukas came across was in the kitchen, he didn’t pull like crazy on the lead or try to lunge at her but he did put his head down slowly and try to put his mouth round her neck, he was on a short lead so a pull back and a firm ‘no’ stopped him. The cats beat a tactical retreat soon after to the shed roof, where Lukas could see them. He tried barking at them and was told ‘no’, then he tried to induce our other greyhound Lee to launch a joint run-up at the shed with him but Lee was having none of it and soon retired into the house for some serious resting.

The cats were quite soon persuaded down and we put them upstairs in one of the bedrooms (with all the necessary comforts of course; hot water bottle, cat tray etc) which they made their HQ for the next few days. The door was shut when Lukas had the run of the house but every couple of hours he would be put on his lead and taken upstairs to ‘visit’ the cats. At first he was very curious about them as they sat on the bed, wanting to get as close as possible. We would hold him by the lead or collar just out of biting distance (although he never actually tried to bite) and let him sniff them whilst stroking him and the cats alternately and just saying calming things like ‘good Lukie’ ‘nice cat, good cat’ etc.

We carried on like this for a few days, letting the cats downstairs to eat when they wanted to always making sure he was on his lead at the time. He would watch them eating and we would give him the odd cat biscuit, trying to make a pleasant association with the cat. Of course, the other 3 dogs wouldn’t be left out so it had to be cat biscuits all round.

When we took him for his walks we would let the cats out of their room and quite often they would be out in the house when we got back so Lukas would have to stay on his lead for a while until they went outside or back upstairs of their own accord. If they had gone outside we had to be careful not to let him out into the garden off the lead as he seemed more tempted to chase them outside than in.

We would get someone to sit on the floor holding him on a loose lead while the cats walked through the room. At first he would only take his eyes off the cat to look at the other dogs and obviously couldn’t understand why they preferred sleep to cat murder when they were off the lead and had the perfect opportunity. At one point he got too close to the grumpiest of the cats and was sent screeching across the kitchen after a direct hit on the nose and no sympathy from anyone. After that he seemed a bit less interested and certainly a bit more polite as he stopped staring at them and would avert his eyes.

It took about 4 days for him to be lying in the room and not to get up when one of the cats came in. By this time he had got his ID tag so I could hear by the jingling exactly where he was in the house or if I had my back turned I knew if he was still lying on the sofa or hear him getting up.

On the 4th day he was lying on the floor, off the lead by now, when one of the cats came into the room and stepped over his feet, she then turned round and stepped over them again, he didn’t react. By day 5 I was happy he was going to be fine with them, especially as one of them dive bombed him from the top of the chest of drawers as he was lying on the bed and he barely even raised his head.

On the next day it was hot and sunny so I introduced him to the idea of being out in the garden with them, this only took a few minutes so now we can have the back door open again!

We have had Lukas for two weeks now and he is the best of friends with the cats, last week I came into the room to find him lying on the sofa with our siamese cat draped over him, they were both asleep. Unfortunately I didn’t have the camera!

In between learning how to ‘do’ cats over the past 2 weeks Lukas has had to learn stairs, housetraining, televisions, hoovers, washing machines, things lying about on the floor that trip you up (like shoes), small children, old ladies admiring him in the street and other dogs. By this I mean dogs which are not greyhounds and I think he has found these even more mystifying than cats. He has the habit of barking at them. I am certain this is not aggression but exuberance and curiosity but it can be quite daunting to other people. We have deliberately not avoided other dogs as we don’t want to reinforce this behaviour. We have been explaining it to people and everyone has been very understanding. He is quiet and polite once he actually gets up to the other dog and he is not barking as soon as he sees one at a distance any more so things are improving but we would like to put a stop to it completely and would be grateful for any ideas from anyone. He is not allowed off his lead yet, he knows his name but doesn’t always answer to it and is not food motivated.

Still, he has come on very well in the last 2 weeks and we are very pleased with him.

Soon he will be neutered, have his teeth cleaned and the bad ones out and get his micochip put in.

It can be quite hard work introducing your new greyhound to your cats. It involves a lot of closed doors and requires knowing where all the cats and the dog are at all times at first. This is much easier if you are not on your own in the house all day and there is great relief when people come home from school and work and can be roped in to help. If the neighbours could hear us through the walls they must have got fed up with us shouting up the stairs; “where are the cats? Are you sure they’re all there?”

Obviously all dogs and all cats are different, it helps to have cats who are used to dogs and who don’t run, it helps to have other dogs who are good with the cats and can set an example but it would be very sad if people really want to re-home a greyhound and the only thing stopping them is that they have a cat or cats.

It can be done, even without using a muzzle. This is just the particular way we did it and which worked for us.

I forgot to mention that we have some pet rats, Lee will let them walk over him and look in his ears and doesn’t mind at all! We have met another greyhound who is good with rats. (Hi Kevvy!)

Please note: Donations can be added in your shopping cart, but may affect your postage charge and you may wish to adjust your donation value accordingly. All donations are gratefully received thankyou.