España es diferente; (not for the squeamish)

España es diferente (2004)
We are sorry to report another recent hanging, this time in the same area where Phil from Anglia TV, Mandy and I were in September on the outskirts of Albacete where two galgos were found in a well. The date of the atrocity must have been about 29th October. The right ear is gouged out and bleeding, as if to remove the earmark. The dog apparently had been loose for sometime, and it was volunteers from Arca de Noe who went there and found the poor dog.

Sadly this is not an unusual occurrence. What is unusual in these remote areas is that they are ever found. Even most Spanish citizens I guarantee do not believe that these things happen in their own country and their press are not interested in publicising it. Balbino sent photos to the national press with no response at all, whilst his local papers did print it.

It leaves us speechless. After so much obvious concern, publicity and effort put in by many hundreds of dog lovers in several other countries over many years now on behalf of the greyhounds and galgos of Spain, still this makes no impression whatever on attitudes and public reaction with Spain itself. 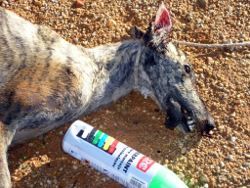 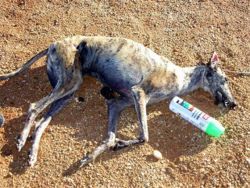 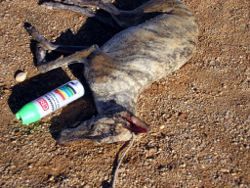