Campeonata de Espana de Galgos
en Campo Copa de S. M. El Rey 17th January 2004
Report from Josephine Van Den Bergh of Greyhounds Rescue Belgium, with photos by Marcella Zappeij
On January 16th, Marcella and I went with Virgin Express to Madrid to collect 5 galgos, rescued by Cristina Garcia Moreno (Galgos Sin Fronteras). Cristina picked us up at Madrid airport at about 23.00hrs. We didn’t have much time to talk about the latest news, because we were all very tired and we had to get up early in the morning.

Saturday morning we went to Toledo, to the town of Barcience, where the “Campeonata de España de Galgos en Campo” (Spanish Galgo Coursing Championships) take place every year. Several other associations, like Galgos Sin Fronteras, Amnistía Animal, Ecologistas en Acción, went there too, to protest silently against the awful conditions the galgos are kept in and the terrible way they are treated. This area is well known for its wine and cheese, but also known for the cruel way its animals are treated. 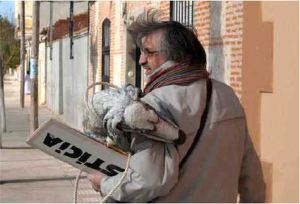 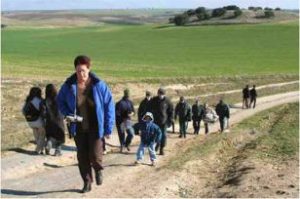 When we arrived at Barcience, we had to park the car at 3km from the place where the Championship was organised. So we walked about 3km to the top of the hill. When we finally arrived, the Guardia Civil stopped us. They did not want us to join the galgueros with our big papier mache galgo with a noose around its neck, because they thought it would not be safe. In the turmoil they produced, the galgueros surrounded Cristina and the Guardia Civil had to interfere. The incident that followed shows how violent galgueros and gypsies can be: two of them started to fight and in the fight, one of them stabbed his adversary with a knife in the neck.

Thousands of people attended the spectacle in which a hare was released and 2 galgos tried the best they could to defend the honour of their master. It is sad to know that these innocent, unsuspecting galgos, once they are no longer of ‘use’ to their owner, will be killed without mercy in a cruel and horrifying way. 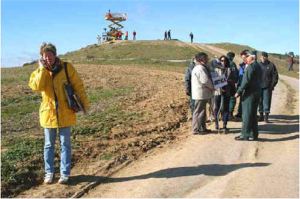 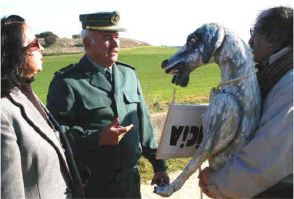 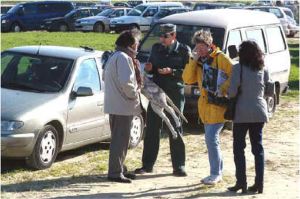 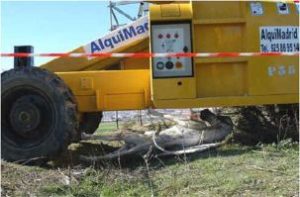 Marcella had taken enough pictures, we had seen enough and so we went back to the car. We followed the people from Amnistía Animal, who had seen a galgo lying along the road. And indeed a little further we found the poor, emaciated creature that had died of lack of food and water, at the side of the road. As if that hadn’t been enough, we also found a young galgo, bathed in its own blood. When we turned it over, we saw that it had been shot in the breast. His faithful service to his master had been rewarded with a deadly gunshot. When you are confronted with such meaningless violence and suffering, you long for your own, safe environment at home, and you are thankful that the galgos you rescued, have escaped from this dire fate. Could someone who kills a poor creature so mercilessly and violently ever love another human being? 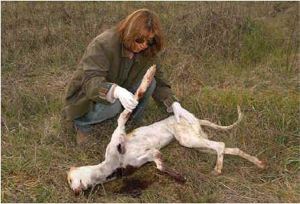 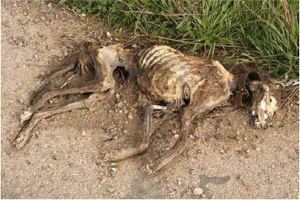 We all stood crushed and silent along the road. I am convinced that the people who claim that things in Spain have changed and that the hunters take good care of their dogs, are those too who kill and torture animals and that they are only trying to conceal and excuse their own atrocities.

Even the Guardia Civil told us that they know what happens to the galgos in Spain, but as they live in the same villages as the galgueros, they don’t dare to take actions. I was horrified by the thought that people are capable of ignoring their conscience, their hearts and minds to such extent and prefer not to see the intolerable cruelties that take place right under their noses.

We went quietly back to the car and drove back to Madrid, to pick up the five lucky ones we could take with us to the safety of new, caring homes in Belgium on Sunday. It was heart-warming to see how they loved Cristina and followed her everywhere. We played with them and cuddled them and than we had to say goodbye, but not for long, because the next day we would come to pick them up.

For us it had been a long, stirring and emotional day.

On Sunday morning Mila, Oton, Rufo, Princess and Lara travelled with us to Belgium, on a smooth and comfortable journey to safety, to their new homes, where their new families would love and care for them for ever

I would like to tell you something about what happened at the hare coursing championship in Barcience (Toledo) on Saturday. Although I was late for the event because of a personal problem, when I arrived I found that the Civil Guard had confiscated all our placards before we could even get them out to prevent the galgo owners from (in their words) “beating the hell out of us” because there were only four guardsmen and they would not be able to protect us.

There was a confrontation, but Cristina from Galgos sin Fronteras (Galgos without Frontiers) managed to describe very clearly in front of the cameras from TV2 the plight of galgos in Castile-La Mancha. This did not go down well with the “rabble” (as the Civil Guard called them).

But at least we drew attention to the problem and this is just the beginning. We are starting a campaign to shame Castile-La Mancha into reacting. Once the list of names is ready, we will send it for you to forward to as many people as possible. Unfortunately, this is the only sort of dialogue they understand. Mr. De Bono, the President of Castile-La Mancha (if he deserves such a title) refuses to meet us or even talk to us. So, we have decided to make him listen.

As I said before, I was late for the protest meeting. On top of that, I took a wrong road and found a dead galgo – a female – lying in the middle of a field with a gunshot wound in her chest. These S.O.Bs. (excuse my language) must have killed her during the night because the blood was still fresh. Then they have the nerve to say that they look after their animals, damn them all. A bit further down the road I found another dead animal and this left me feeling totally depressed. I just can’t understand how people can be so wicked. On the way back, we took photos of the dogs.

These people have no scruples. They steal galgos from each other. When we went to the Civil Guard barracks to recover our confiscated placards, we were told that four galgo owners had started in a knife fight among themselves and some of them had serious injuries. While we were there, seven of these S.O.Bs were brought in under arrest. They deserve the same fate that was meted out to the galgos on the road.

My thanks to those of you who turned up for the demo. Knowing that it could become a confrontation with riff-raff. We can’t afford to do nothing. 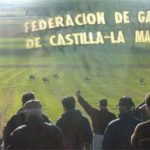 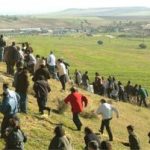 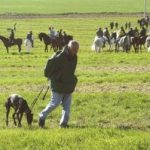 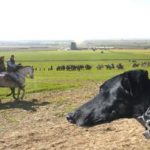 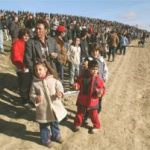 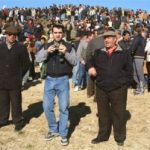 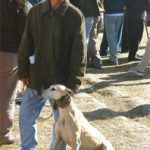 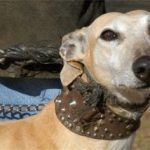 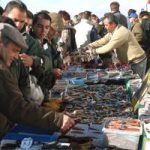 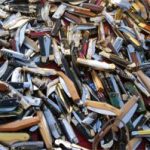 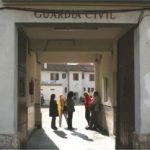 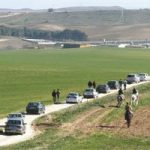 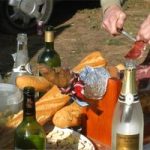 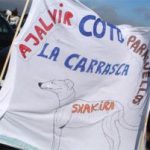 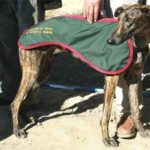 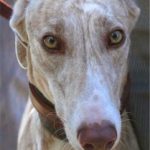 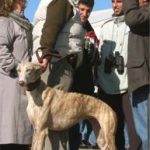 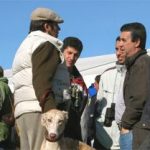 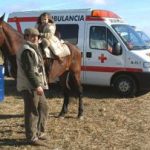