On Sunday, February 12th 2006, the police handed over an official order to the volunteers of Arca de Noé Sevilla to close down their shelter, announcing that the installations would be demolished Thursday morning, February 16.

This cruel order left the volunteers only THREE DAYS to find homes for the 148 dogs and 60 cats in the shelter.

They immediately posted emergency messages on the internet platform for volunteers of the shelters in? Spain ‘Animales sin hogar’, urging their colleagues to help them. They also contacted radio stations, television and newspapers, desperately asking for help and denouncing the way they were being treated by the community council of San Juan Azalfarache (Sevilla).

The official reason to close down the shelter was the bad shape of the installations and the fact that there were too many animals present. This was true, but Arca de Noé’s situation didn’t differ from any of the shelters in Spain which have to finance everything themselves and don’t get any help from the authorities whatsoever. Besides, the situation in the official ‘perreras’ is often worse than the situation in Arca de Noé, and although these have often been denounced, the authorities never have undertaken any action.

The ‘solution’ the city council offered, was to transfer all the animals to the ‘perrera’, the official dog pound of Mairena. These ‘pounds’ in Spain are notorious for the cruelty and the indifference with which they treat the animals. Moreover, they are legally obliged to ‘exterminate ‘ the animals after a short period (usually about 15 days) of time, if they aren’t adopted. And ‘exterminate’ is the right word, since the poor creatures are not ‘humanely euthanased’ but killed in the cheapest possible way. (I attach a picture of a ‘perrera’).

The animals of Arca de Noé would stand very little chance in this ‘extermination camp’ as the Spanish volunteers call it. None of the volunteers wanted to see any of their precious animals they had rescued and cared for, in Mairena.

The race against time started immediately. The phones of the shelter and the volunteers rang day and night; their mailboxes were crowded with messages of people wanting to help. Trying to organize all this, the volunteers started transferring the most vulnerable animals to temporary homes. But however sad the situation was, the solidarity was tremendous and encouraging: ‘Passion Lévriers’ in France offered to take the galgos; ‘Dierenhulp zonder grenzen’ in Holland made room for 25 dogs; a German organisation arranged to adopt 10 cats, and shelters all over Spain, however crowded and poor they are, offered to take dogs and cats.

In the meantime, a volunteer of Arca had been on the radio, and the local television, ‘Andalucia directo’, broadcasted the news. As a result of this, the people of Sevilla showed they have their hearts in the right place, and many of them offered to adopt a dog or cat.

After three days and nights of fear, sadness and very hard work, the volunteers gathered at the shelter on Thursday, waiting for the bulldozers to appear. They desperately tried to postpone the demolition, because there were still dogs and cats in the shelter. Although lots had been adopted and temporary homes had been found for the others, it was absolutely impossible to transfer all the animals before Thursday.

But the mayor of San Juan Aznalfarache relentlessly rejected the appeal.

The volunteers had to rush to take out the animals while the bulldozers were tearing down the installations. They had to tie the animals to the fence surrounding the shelter, in the pouring rain. On the radio the launched a desperate appeal to everyone with a car or van to come to the shelter and help transport the animals…

As you can see on the pictures, some of the dogs had been brought to a barn, which a kind soul offered them temporarily. 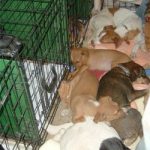 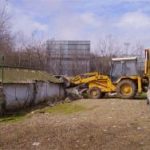 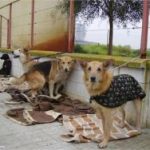 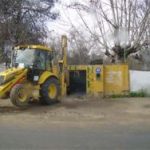 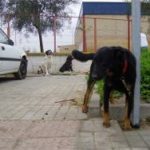 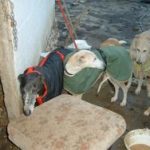 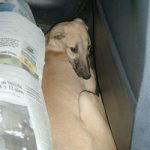 This disgraceful event has left a deep impression on all the people involved – in Sevilla and in the other European countries.

As Nuria Sanz Cortes, a volunteer of Arca de Noé Sevilla puts it:

“It was all very sad. A week ago, we never could have imagined that today there would be left nothing of our shelter and that we would have to get our animals out in this way.”

But all the volunteers were deeply moved by the tremendous solidarity they experienced from the people of Sevilla, the volunteers of shelters all over Spain and organisations in France, Holland, Germany….

Thanks to the huge effort of the volunteers and the overwhelming solidarity NOT ONE SINGLE animal had to go to Mairena!

They hope that the solidarity won’t stop here. Several animals are still in temporary homes where they cannot stay too long.

The volunteers of Arca de Noé need your donations to pay for the transportations and to care for the animals that are still in Sevilla waiting for adoption, but, above all……….TO BUILD A NEW SHELTER!

Because, and I quote Nuria again:

“There is now one shelter less in Sevilla, one place fewer, where the animals of the streets of Sevilla, may now find refuge”