Ageing pets; could my dog have dementia? 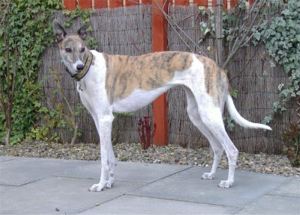 Now that our pets, due to improved veterinary and preventative health care, live rather longer than they used to, we will be seeing conditions associated more with age, like cancer, and even dementia…..

Fiona, in Scotland, has four dogs, including a galgo. She speaks here about Lizzie, one of her greyhounds, hoping that her experience could help other dog-owners too.

Disturbance in the sleep patternSenile Dementia or Canine Cognitive Dysfunction (CCD) in dogs is more common than one would think. It is believed to be an underestimated problem. Owners of ageing dogs often put changes in behaviour down to ‘old age’ and it can therefore go undiagnosed. There are many symptoms of dementia which may include: 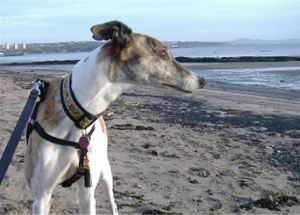 It may also just appear that the dog is ‘different’ in some way. Veterinary intervention can be invaluable as drug treatments can halt or slow down the progress of the disease. However, it is important that other diseases are ruled out before dementia is diagnosed.

There are special ‘veterinary diets’ available for dogs showing signs of brain ageing but many seem to have high levels of protein which is unsuitable for Greyhounds. A nutraceutical supplement called Aktivait can also be useful. It contains a mixture of anti-oxidants and nutrients which are essential for optimum brain function and can improve vitality, mental alertness and memory. Herbal remedies, such as Skullcap & Valerian, Cani-Calm or Serene-Um, can also help if the dog is showing signs of anxiety. It is also very important to provide mental stimulation such as ‘activity toys’, Kongs and anything else to keep the dog occupied. Routine is also very important, as is good ‘quality time’ and interaction with the dog.

Stronger drugs such as Selegiline can be prescribed by the vet if other treatments fail to work.

The following is an account of our ongoing experiences of Dementia with our Greyhound Lizzie.

At the beginning of this year our Greyhound bitch, Lizzie, started to behave a little strangely. She’s never been a ‘normal’ dog but there were changes in her behaviour that we’d never seen before. By the end of January it was clear that something wasn’t right. Her eyes were no longer sparkling and they had begun to look dull and ‘empty’. She was also staying up most nights, wandering aimlessly and whining. She used to be a real Daddy’s girl, spending lots of time with my partner, like his wee shadow. This had also changed and she was either spending more time with me or on her own. We had our suspicions that it could be dementia but Lizzie was only 8 ½ so we thought it couldn’t be. One night, she woke me up wanting out to go to the toilet and this was the point where we knew she needed help. We have a baby gate at the top of the stairs to keep the dogs upstairs at night. I opened it for her to go through ahead of me but she just stood there looking confused. She then tried to get through the space between the gate and the wall, which must be around 4”. It wasn’t as if she had missed, she was trying to force her head through the gap repeatedly. It was utterly heart breaking to see her so confused. That morning, we took her in to see our vet who agreed with my suspicions. A thorough check up showed nothing untoward that may be responsible for the odd behaviour. At only 8 ½, she was very young to be showing signs of dementia but they were clear. Our vet decided to try her on a nutraceutical drug called Aktivait. It contains anti-oxidants and nutrients and has a good success rate in slowing or halting the progress of brain ageing in older dogs. We wanted to try her on this before looking at stronger drugs. We were advised that it may take up to 6 weeks to see a difference but if she didn’t respond within 8 weeks we’d have to try something else. In the meantime, we stuck to a very rigid routine. Walks and feeding times were at the same time every day and we tried to provide Lizzie with as much stimulation as we could. We gave her a ‘Kong’ a few times a day, stuffed with meat paste, chicken, ham and anything else tasty we could think of which kept her occupied for ages.

Lizzie had suffered appalling abuse prior to me finding and rescuing her. She was repeatedly beaten unconscious with a metal bowl if she spilled her food and was also given ‘performance enhancing’ drugs to make her run faster. One theory was that there is scarring to her brain, similar to a boxer would have, due to the abuse and that the drugs she was given also added to the ‘brain damage’. It would certainly explain why she developed dementia so early. Unfortunately Lizzie deteriorated quite dramatically in the following week. She was totally bewildered and it was as if she had no idea where she was or who we were. When we let her out to go to the toilet she would just stand there looking confused. One good thing was that she remained quite happy throughout all this. She even regressed a bit and started playing like a puppy which she had never really done in all the 7 years we’d had her. In the following week she deteriorated even more and started urinating in the house. She was also awake all night, whining. In case she was anxious at night, she was also prescribed the herbal remedy Skullcap & Valerian. The following evening she slept all night.

Three weeks into treatment we were starting to worry we were going to lose her. However, one day I thought she looked a bit different. My partner agreed but we thought it was wishful thinking at first. The next day, there was no mistaking it. The improvement was quite dramatic. She had improved remarkably and the ‘old’ Lizzie was back. We were stunned that it happened so quickly. Lizzie’s eyes were sparkling again and she was bright and alert.

We are now 6 weeks into treatment and she’s absolutely fine. She initiates play with our other Grey, Lurcher and Galgo and carries on like a puppy half the time. She sleeps through most nights and is back to being my partner’s wee shadow.

I wouldn’t hesitate to recommend Aktivait to anyone with an ageing Grey. It’s available without prescription from the vet and costs around £30 for a month’s supply. Expensive, but it’s worth every penny. It’s given us back our wee princess.