A Time for Action 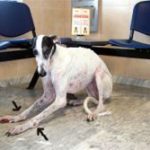 We understand now that in addition to Mila’s other problems, she was burned with battery acid. This is the latest photo we have received from France where she has found a safe haven, thanks to Passions Levriers.

Our webpage tells largely of our work and work of others for these dogs, but occasionally we have to remind ourselves of the reality of the lives of hundreds maybe thousands of galgos in Spain and why we do this work in the first place. As we are now well into the hunting season once more in Spain, the horrors are coming to light again and shelters and dog pounds are seeing this sort of thing. Since the beginning of the year we have seen several like this. It is the new fashion with the galgueros in 2005 in Spain, now that killing galgos is a fineable offence, to instead break the legs of the dogs with blows, to stop them running after the car that dumped them, so they are disabled and injured and are left to starve to death in unutterable agony.   Little Ana died in Germany, in the arms of Diana Jork, because despite surgery, she had been so starved that she lacked the nutrition and strength to sustain life.

We are not asking for money. I am asking for you all to shout from the treetops about these appalling acts of cruelty; to write to your MEP; to write to the Spanish tourist office; to write to your Spanish Embassy; to alert the press, TV, radio, local and national; to alert dog lovers, dog clubs, rescue groups, your nearest greyhound track, everywhere, of what these animals are suffering in Spain. If the Spanish authorities don’t care enough to investigate these crimes, then it’s up to us to expose it and say loudly what we feel about it. The perpetrators of these wicked acts should be shamed internationally and not let off scot-free.

Don’t let these galgos suffer and die in silence!!!!!!!!!!!!!!  That’s up to ALL of US. We can all play a part in knocking a nail in the coffin of such deliberate, wantonly cruel acts.

Mila; she was found in Badajoz. We learn she is now in France, thanks to the help of other groups. She had been burned by battery acid and is awaiting surgery. See the latest: http://non.a.la.torture.des.animaux.over-blog.com/article-959620-6.html 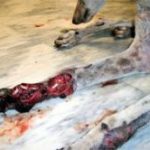 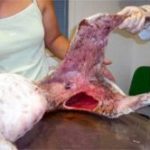 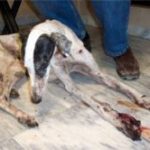 Little Ana died after surgery in Germany in the care of Galgos in Not. Due to starvation, she did not thrive. 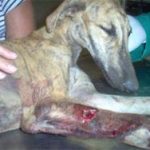 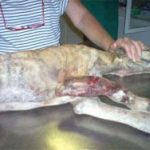 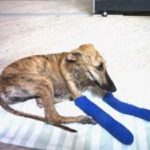