A Pine Wood, A Stable, A hillside.
April 2001 Not for the sensitive. (Images at the end)

A telephone call from a journalist in Spain prompted me to go quickly to investigate more sad discoveries of the abuse of galgos, this time very close to a fashionable tourist area. On 16th April a galgo was found hanged and beaten. This time it  provoked some outrage among local vets and animal welfare workers who were offering a reward for information leading to the perpetrator.

Together with a local Spanish volunteer helping abandoned animals in her area, we sought out a number of galgos we had heard of being kept in poor conditions, mainly among the gipsy communities, on the edges of the outlying towns and villages. These are mainly no-go areas not recommended by the police or local people for visiting.

We went first to a neighbouring town, to the gipsy community on its outskirts. There we found galgos left unattended in a makeshift stable where there were a number of horses, tied closely to the wall and standing, as we were, ankle deep in horse droppings. The owner was in Barcelona where he sells the horses he breeds for food. Through slits in the woodwork, we could just see two black galgos in a filthy shack of bricks and wood, without food or clean water. By removing some bricks, we could just push food into the shack, and they ate ravenously. Another black greyhound bitch was running free, with a limp and shivering as if she was ill. Dogs let loose like this are no longer wanted or useful, so they are not fed, but faithful creatures as they are, they still hover around. We put down food for her but other stray dogs came and ate it. Maria, my companion, promised she would return to offer to buy the bitch from the owner when he returned from Barcelona. We left food with one of the neighbouring onlookers who promised to give it to her. By this time several people came to see what we were doing. I handed out greyhound collars from England, which intrigued and pleased them as they boasted how many galgos each of them owned. I had brought hundreds of doses of antiparasitics sent by David Wolf of the National Greyhound Adoption Programme, USA, for treating ticks and fleas and we showed how to apply them. Down came torrential rain and we were soaked through. We all huddled in a doorway squashed closely together, and I had the slightly unpleasant sensation of wiping off my face the drops of water, ticks and fleas which crawled all over me. Later, children took me to see a galgo bitch and her pups at the back of the dwellings in a cave formed out of the hillside. They handled the pups freely. The nursing bitch looked good in contrast to the unwanted galgos wandering around but then she was being useful…

Next day, we went to another town, and guided by locals, made our way up a hill to find more galgos. On arriving at the top, we saw nothing except what looked like a rubbish tip. We could just make out, amongst the strewn litter, roughly made wooden and other containers. Then as we approached we saw dogs chained to the rocky ground. There were no floors to the boxes which were just three panels over rough rock.. The fear on the dogs, faces as we approached, reflected their experience of humans, and knowing how unaggressive greyhounds are, such a reaction makes this work almost unbearable in its reality and pathos. We started cajoling them immediately with food, and applying the antiparasitics. There were four dogs free – one very lame, unable to put his hind leg to the ground. They wouldn’t touch the food until we moved away. There were two sets of pups with mothers. One litter of pups was penned up. The mother’s collar was so tight that her neck was bleeding and the collar could not be loosened except by cutting it off. I had given away all my collars the evening before so Maria went to the village to buy a collar while I continued to apply the Flea Halt. One longhaired black galgo, chained to the top of a metal sheet over another shelter, barked anxiously with fear and apparent aggression. I spent a half hour carefully and slowly approaching him from the ground until at last I was able to embrace him and apologise for the failing of the cruellest species of all – man – but what good would it do? Maybe this would be the only embrace he would ever have in his harsh life. There were more pups under this metal sheet. Three of them came out, but inside, in the dark, I could just make out the shape of another – was it dead? The entrance was very narrow and I could only crawl in on my stomach and I reached out to touch the body. It was warm and I was able to drag it out. It was sick; the stomach distended to bursting point with worms and the heart beating very fast. Maria returned. There were no collars in the town. We emptied my holdall, hiding the pup inside it and Maria took it back to the car where there were many people – hoping and praying that the little pup would not make a sound and be discovered. She succeeded. She took the pup to her vet where she would be safe now, treated and exported to a home, probably in Holland.

While she was away, two children appeared. I knew then I was discovered and within 30 minutes, about 15 men arrived, somewhat menacing. I walked towards them smiling and extended my hand to each one introducing myself. I had to think fast, and played my ace card first, bringing out from my bag the most valuable item I had. It was a used English leather double coursing lead, which for a complicated reason had been left on my hands. Their eyes changed from dark coldness to questioning interest. Does it work? How much must they pay? Nothing? I spoke to them about the dogs, the galgo ingles, the galgo espanol, the tattoo marks, the injuries, the parasites and showed them my book, pictures of our dogs in Alicante, and their interest grew. I demonstrated how the Flea Halt is applied and they caught the roaming dogs and treated them. We exchanged addresses so I could send my video in Spanish ‘El Cuidado del Galgo de Carreras‘ (The Care of the Racing Greyhound). Several of them could not write or read. My feeling is that in order to make progress in the long term,we need to make a good relationship with the gipsy community. Overriding the owners of the dogs only serves to antagonise them and to isolate the dogs from our help.

Maria came back with the collar and with their help replaced the tight one on the bitch. She also brought worming tablets which we all gave together to the dogs and puppies. Then came an invitation to us from the owners, of lunch and a party with flamenco singing! My familiarity and knowledge of famous puro flamenco singers did not go amiss either!

I have experienced many times now since my first encounter with the greyhounds of Spain in Mallorca in 1991, the pain of seeing these hungry, dirty, frightened, flea and tick-ridden dogs with their sad, hapless, expressions in the hands of those with a mentality light years away from ours in terms of ideas and views about animals. These people are not without hearts and the cruelty is not deliberate but they are incapable of imagining an animal as a sentient being with needs like ours of healthcare, regular food, clean water, freedom from parasites, adequate shelter from the heat and the cold, bedding, exercise and affection.

It is hard not to feel despair knowing that barely one village exists in Spain without such areas on its outskirts with dogs in such harsh conditions. The problem in Spain is colossal and the numbers of greyhounds and galgos in need are too many to even imagine an end to the problem.

Please write your letter to the Minister; please consider sponsoring one of our dogs to help us care for the two hundred in our rescue centre; and please pass the word around among dog lovers in whatever country you are, to consider adopting one of these greyhounds. 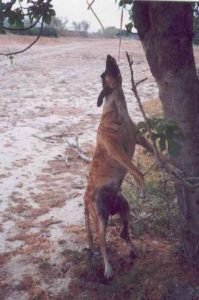 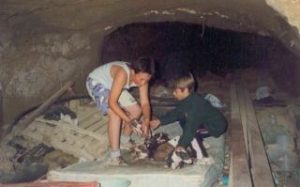 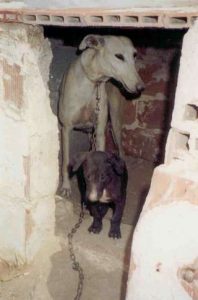 Bitch with the collar cutting into her neck 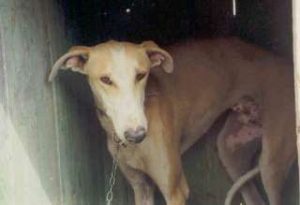 Chained up and so sad. 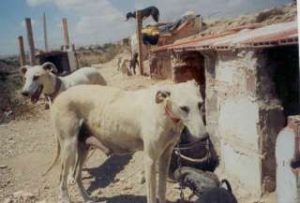 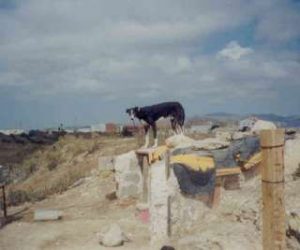 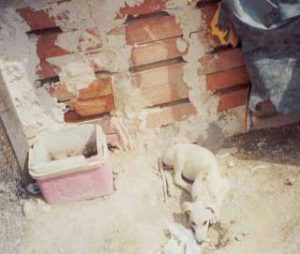 Pup in the gravel 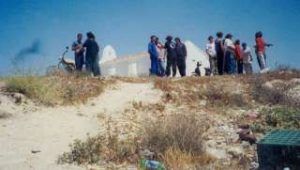 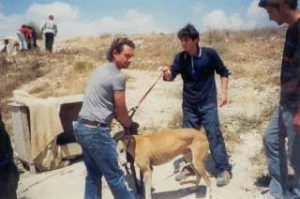 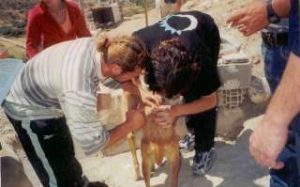 Showing how to apply antiparasitics 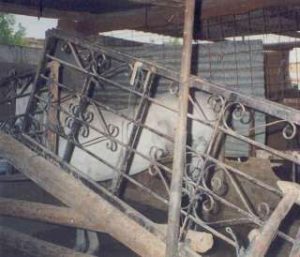 Horse tied tight to the wall in the stable