The public’s view of an animal welfare worker spending time walking of fussing homeless dogs or introducing one lucky pet needing a home, to a welcoming family group, sadly is far way from the reality of running and funding a charity which is responsible for altering the lives and futures of 700 abandoned and discredited animals every year. ‘Greyhounds in Need’ cares for greyhounds abroad especially in Spain, both those exported there from Ireland, and the galgos Spain’s own greyhounds used by hunters for coursing.

The turnover of the charity is around £100,000 per year since we were registered in May 1998, which is consumed as it comes in, mostly by kennelling and veterinary costs, transportations and by the publicity and promotional material needed to raise awareness world-wide which earns us the resources, homes and support necessary to carry out the work.

Working with different countries increases the complexity of our work hundredfold as we struggle with language and cultural differences and try to gather data, and maintain control and good communications with the volunteers and professionals carrying out the work we pay for 1000 miles away. Imagine organising a home check in Finland or Luxembourg, while scratching our heads as to how to do the same in Tunbridge Wells or Hove; or think what it takes to co-ordinate a 20 hour transportation of dogs from Alicante to Calais, dropping off dogs in five different countries on the way, whilst at the same time pondering how to get two galgos from Dover to Banff, north of Aberdeen.

Amidst the tension and breathless activity, we might have a giggle. Our French collaborator is still looking for the town called Schedule, as she heard our drivers were just behind it!

As volunteers, we have to fit this work around our daily jobs and our domestic duties. For me, the latter have disappeared completely, along with attention to my husband, friends, family, personal finances, appearance, car, house, garden, wardrobe, health, own space and quietude! I don’t recommend it to anyone!

I have one weekend off per month from my nursing job and took the opportunity to fly to Barcelona to look over some kennels where we might board rescued dogs. I arrived somewhat dishevelled and ruffled, not being able, at 03.00am, to find my jeans (my staple ‘diet’ for such trips), and having just received by courier a replacement personal mobile phone, not connected and not charged. This phone is so essential for this dog work, and I lost it after returning from my clinic at midnight the day before. I was also kicking myself because, due to lack of time and not wanting to wake the neighbours in my cuI de sac by rummaging in my garage at that hour, I had not packed all the veterinary medicines I wanted to take to Spain. They would have to be sent another time. I arrived at the flat of a Swiss volunteer married to a very patient Spanish husband. Their modest flat was shared with two podencos, a cross Jack Russell/Pit bull terrier, and a lame cat. In addition, they had collected two tiny kittens washed up on the beach in the tornado of the night before, and two pups, a pointer and galgo, accompanied by their rescuer from Zaragoza. The bathroom was out of bounds due to the kittens being kept away from their jealous cat. The two pups relieved themselves where and whenever they felt like it with Carlos following behind them with mop and bucket. The phone rings every five minutes; no-one has yet picked up the permits for the demo at 12noon; one of our 8 greyhounds going to Germany appears ill and could they send one of theirs? Where shall we meet up with the friend taking us to Vic as parking is impossible in Barcelona.

Two German ladies arrive, harassed after battling through hailstones in the Barcelona traffic. My friend typed out the certificates they needed to go through several borders to Germany and I counted out the money they needed for the diesel. They are taking our greyhounds/galgos; plus the two pups and ten little dogs from anther refuge. The volunteer from Zaragoza weeps as her pups that she had rescued and grown to love, were packed into their crates in the hired van never to be seen by her again. We hugged the German volunteers and wished them well on their hugely long journey. Breakfast was a miss. We had to pick up the permit and be in San Jaume square with our three dogs by 12 noon.

To arrive there brought a lump to the throat. About 1000 Catalonians were there with banners and chanting, Tortura animal al codigo penal!

petitioning for justice for the abused and tortured animals of Spain, amazingly not protected in that country by any national law. If they were, of course, then bullfighting would be illegal and this is such a strong immutable part of Iberian culture and tradition. The crowd subsequently processed through the main streets and my friend held her breath as the permit did not allow for the stopping of the traffic!

At 1:30 pm we had to leave to drop off the dogs at the flat and then met our friend for the drive north of Barcelona. The kennels were not easy to find being isolated at the top of a hill. We met the vet who showed us around and in three languages, Catalan, Castilian and English, we discussed slowly and painstakingly, checking that all four of us understood accurately, how the dogs could be accommodated, what work needed to be done on them and then of course the costs. After two hours there, it was already dark and we headed home through the appalling weather conditions on a fast motorway, only to see the disquieting array of red hazard lights and police cars ahead. The traffic is at a halt in two lanes and we see one 4 wheel drive turned over the barrier on to the field outside, another car crumpled in the middle of the motorway with debris all round it and two other vehicles damaged, and ahead, one more silent tragedy – a lovely yellow Labrador lies in the road, revealing the cause of the carnage. I’m told it is a common occurrence how abandoned animals cause severe traffic accidents in Spain, and yet it continues day after day and there is no obvious attempt to deal with the root cause. The obsession with puppies and the abandonment of dogs once they become adults, is rife throughout Spain. Sorrow, emotion and the inane senselessness wells up in one’s throat to the point of being unbearable. I asked to be dropped off at the dog track and more misery confronts me. After 10 years of being involved in the welfare of greyhounds in Spain, I see no improvements, indeed, possibly a deterioration in the conditions of these hapless Irish bitches exported to Spain for racing.

There are 800 held there in a locked compound next to a cemetery. Before the race, six bitches parade slowly and painfully in front on the punters. These are the top, first category dogs, being in the last four races of the evening. Their coats are like mere saddles over their backs, over hairless thighs, tummies, and limbs and their joints are either bandaged or painted with bright orange liniment in an effort to get them moving round the track. One bitch urinates blood.

Another screams and screams in its racing kennel, a solid blanked off cage with no view, and despite my pleas to the handlers to open up the cage in the forbidden, closed paddock area, they refused suggesting I should go upstairs for a drink. My pent up patience turned to rage, as l left, dedicating myself even more strongly to attacking this export of Irish bitches to Spain.

I took a taxi back to the flat, feeling I could not take much more sorrow for one day. The TV was on, showing a heated 5 hour studio debate between animal protectors and involving, among others, a fur coat manufacturer. The female ‘Green’ politician was doing a fantastic job, until the studio broadcasts the only telephone call that evening. Amazingly the female caller accused the politician herself of abusing horses and a monkey. These sorts of fictional accusations are sadly the grist on which Spanish society thrives. It is common, sadly, and I would simply not have believed such unsolicited malice could exist in a modern society until I met it myself some years ago in Spain. The TV flashes to another station. It is a show in aid of the mistreatment of women in Spain and the news is announced this weekend of the 378th woman to be killed by her partner this year.

At 1.00am I head for bed and oblivion, only to realise I’ve lost again the new mobile phone – the second in 3 days? lost in the taxi? stolen at the track? My mind is never where I am but always worrying about our next move, how to find solutions to our current problems, how to meet our commitments financially and practically. I phone the company once again to bar the calls and apply for another phone… 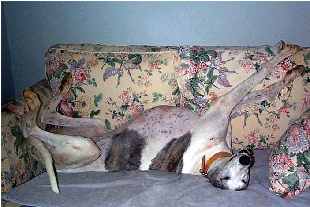 Jilly, now Pip, a 6 year old bitch retired from Barcelona track, and taken into care by GIN in Spain, arrived in the UK with her Pet Passport on November 8th and now lives in Guildford. with Warren and Sue. She had to have 18 rotten teeth removed soon after her arrival.

Tomorrow I return to England