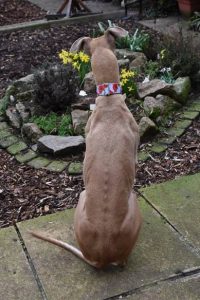 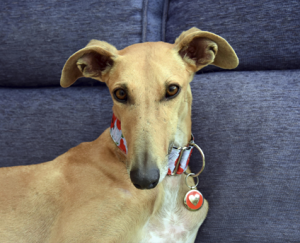 Having said farewell to our dear Perdita (Purdy to her friends) in January 2022 – there was a hole in our hearts which   needed to be filled plus an empty dog bed looking for a new resident! Both of these were quickly taken by a three year old fawn galga called Brandy. I must confess to having a ‘thing’ about names and the name Brandy didn’t appeal so she has become Bambi. This suits her to a ‘T’ from her colouring – to her size and her ability to leap from sofa to sofa with grace, ease and speed. Having such a youngster joining our existing pack of five is a bit of a shock to the system as four of the other hounds are over ten years old. Warrick the elder statesman – also originally from Galgos del Sol back in 2012 is now a teenager as he turned thirteen on 12 February 2022. Bambi was found on the streets of Spain by Tina and her volunteers back in August 2020 at just 18 months old. Given her background she has fitted into home life really well. She has a few things to learn but being a galga – she is intelligent and quick to respond. We may need to consult our Spanish phrase book for the translation of ‘gently’ as treats are snatched and devoured with alacrity – but like so many others with pasts best put behind them, treats are a much prized reward for good behaviour and a new, tasty experience. To show her appreciation, Bambi showers us with ‘kisses’. She loves her meals, sleeps through the night and is virtually housetrained. Unlike many English and Irish greyhounds, galgos are very good at sitting and Bambi does exactly this, looking like a porcelain figurine.

Our ‘new girl’ has been here just over four weeks now and has taken on where Purdy left off in squirrel watching with lurcher pal Lucas (from the dog pound). Neither of these has the stealth and patience that Purdy exhibited but such is the enthusiasm of youth! ‘Watching’ is an understatement to put it mildly, as racing down the garden at breakneck speed with bark chippings flying everywhere is probably a more apt description. Bambi has also discovered squeaky toys much to Dana’s chagrin but to give Dana her due, she just watches this young whippersnapper tossing ‘her’ toys about and squeaking them with great excitement. Having had 22 pups in her time,  Dana is well used to the exuberance of youth. However, like all dogs, they never put their toys away and picking up around two dozen (yes you read that correctly) is a feat in itself.

So if you have a hole in your life to fill with a canine companion, maybe consider a galgo? Check out the Greyhounds in Need website as there are dogs and bitches of various colours, ages and temperaments all looking for a loving, happy and secure future….no more than each deserves.