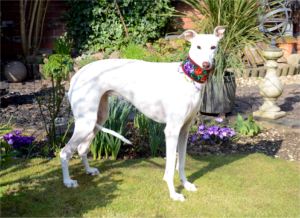 Purdy enjoying her garden in Warwickshire

Hi folks – Purdy here again – first of all apologies to those of you who think I am hogging the limelight having now had a piece in each of the last two GIN Newsletters! It’s just that I am enjoying life so much these days I want everyone to know how happy you can make a galgo by giving them a place on your sofa and in your heart!

I have been here over a year now – having arrived in Rugby on 10 January 2015. Little did I know what the future held but I think I am truly loved as I often hear the words ‘an absolute delight’ – ‘adorable’ etc and I trust that Mum and Dad are referring to me!!

I have already been a ‘calendar girl’ and no doubt some of you have seen me as ‘Miss April’ in the GIN 2016 calendar. Considering I had only been here a few months I think my modelling skills had already started to show. However, my attention span still only lasts a few minutes so Judy has to be quick to catch me at my very best!!

I think I mentioned in my previous update how much I love my food – well that hasn’t changed. I sit patiently waiting whilst my meal is being prepared and even hold up my paw in anticipation whilst chattering my teeth….. except now, in my enthusiasm, I tend to grab the arm of whoever is holding my bowl. However I am constantly being reminded that it is not the ‘done thing’ to bite the hand that feeds you!! Not that I am ever in danger of drawing blood you understand! I like to think that my bid for attention is more of a nibble than a bite!

I overheard that my name is under threat and may well be changed…….Purdy may become ‘Purvy’. If you touch my hind quarters even gently – my back legs jump up and down involuntarily. Even if one of the other dogs brushes closely past me – the same thing happens. I just can’t control my actions and I am told that I look like that Weimeraner on the TV that does the Irish dancing. Still, my Dad is of the opinion that ‘computer graphics’ have been used for the TV dog – whereas my actions are entirely natural – and the source of some amusement I might add!! It can make putting a coat on me a bit tricky as I bounce and squirm and fidget on the spot.

Now – Christmas 2015 was my first Christmas in a home although not my first in England. By 25th December last year I already had a red ‘reserved’ against my name on the GIN website which showed I was ‘spoken for’ but I was not due to be collected until 10 January. Christmas Day with Mum and Dad brought the traditional meal of turkey and we dogs also had some things called ‘pigs in blankets’ – these turned out to be cocktail sausages wrapped in bacon. I don’t mind what they are called as they tasted delicious!! However, I almost got given a very unexpected gift… a one way ticket back to Spain! Fortunately it was the ‘Season of Goodwill’ and Mum and Dad relented! Mum was knitting a toy greyhound for one of the smaller Spanish rescues to raffle to raise money for needy hounds. She had folded up her knitting bag – confident that it would remain untouched – however a very inquisitive galga just couldn’t resist a look! There was a massive ball of wool in there and temptation got the better of me. I had great fun unravelling it … but think it took very much longer for Mum to rewind it!

My squirrel ‘fetish’ has not waned one bit over the past months and I will still sit in the garden for hours on end just waiting for him to appear. I spend so long out there that I have a coat put on me so that I don’t get frost-bite during my vigil!!

Anyway – that’s all once again from a very happy ‘adorable’ little white galga!… and in the words of the movie that’s always shown on TV at Christmas so I’m told….It’s a wonderful life!!

Love from Purdy aka Perla

Welcome to the new GIN shop. Please note: Existing customers will need to open a new account when you make your first purchase. Overseas customers can now order products from the store.